Say there is a power struggle in some country, and you don't like who's winning. How much should you spend, and how much influence can you buy?

There's the little fatso Kim Jong-un, and the elder fatso, Kim Jong-nam. Jong-un was the frontrunner, but he's too young, and many people would like Jong-nam to be the new king. What can they do?

Nothing. Kim Jong-nam has long been an exile in Macau, where he is survives only because China, t protects him against his brother's assassins. China being the guarantor of the NK regime. Kim Jong-nam has many friends in high circles in China, but even that didn't get him in power. Nobody can influence the NK power process. 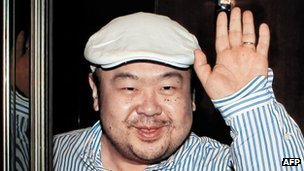 caption="I spend a million every day in meals"

See there are this primaries thing going on. Obama doesn't look too good so there's a lot of attention in the Republican nomination. So far there is a Ned Flanders-went-investor guy as the frontrunner. A loaded Mormon. Fuck that. Let's say you've got some spare dough and you wanna spend it in anyone but the Mormon. How much would you need to spend to make a difference?

And the guy managed to win 3 primaries with the money. See how cheap democracies are? Attention too to the donor's reasons:

No. 1, I think of all the guys that strap a gun on their backs and head to Afghanistan and Iraq to keep us free and safe and maintain what America has stood for.

And people complain when studies say that Republicans are stupid. The amazing is that stupid people can become millionaires in America. And buy presidential candidates! The American Dream for the left half of the Bell Curve.

As I said here, I increasingly think that the only real point of democracy is to lower the price of influence buying for rich dudes. Think of the hundreds of millions that all secret services must be paying to the Syrian rebels to topple the Assads, while some clueless redneck gets to influence the homefront with his spare change.