The deep sense of crisis one gets after knowing of HBD comes in two flavours. Let's call them macro and micro.

Macro is the danger of race replacement. Millions of migrants from sub-90 IQ populations have been moving massively into areas with super-100 IQ populations, namely the West. You don't need to have a tribal allegiance to your people to feel very uncomfortable about that.  For 20 years we have been hearing about how Eurabia will happen during this century, and there's nothing we can do about it. Hell you don't even have to understand HBD to feel very uncomfortable with the prospect.

Still there are indications that immigration is slowing, the migrants already in place have stopped breeding like rabbits, and the native populations are starting to get pissed with this whole thing about being replaced. The wonders of the economic downturn. Miscegenation has also never been very high, so the prospects of the effective disappearance of the white race don't seem quite as certain. I used to get very worked out about all that, but recently I've reached the conclusion that it's going to be ok. Whites aren't going the way of the Romans or the Manchus.

But that doesn't mean that everything is ok. We still have the micro crisis. And that's not even close to being ok.

The micro demographic crisis is the differential birth rate between high IQ and low IQ, in all races. Remember the prologue of Idiocracy? Well that's it. Smart people worldwide are having less children than average, and the dumbest and most dysfunctional people are pumping out kids like rodents thanks to generous welfare benefits. The consequences must be, of course, a general dumbing down of the population.

That's a problem in all populations of all countries. Whites are getting dumber, Chinese are getting dumber, American Blacks are getting dumber, even Arabs are getting dumber. The fact that different peoples all over the world are experiencing the same problem means that it's not about religion or culture. There's something deep going on, and nobody knows how to fix it. Well in most places PC forbids people to even notice or care about the issue. But even Singapore is having trouble with it. See this article on how the uber-realist Singapore government is utterly incapable of getting smart people to have kids. And not for lack of trying.

But of course it's not that hard to understand the reasons behind the differential birthrates. People are just obfuscated. Governments are basing their policies in supplementing couple's income, when the dirt poor Afghans are having 7 kids per woman.  It's obviously not about money. It's about hypergamy. Even the UN (!) admits as much. Smart women don't have more children partly because they're busy working, but mostly because they don't want to. Not with a beta.

Giving women an education gives them money, status and independence, so they can follow their instincts more freely. And while not all of them are hell-bent on riding the alpha cock carrousel, it's quite natural that they don't want to settle down with an average chump. Let's face it, most men suck. Even Mencken will tell you that. The average man is a mediocre animal. Of course the average woman isn't all that cracked up either. But a college educated woman has spent 15 years of her life reading bullshit about how nice, pure, smart, and just plain awesome women are, and how they deserve everything they wish for. It's not even their only fault, their friends and families pretty much enable them too, setting unrealistic standards for the men they should marry. Hell, I'm the voice of reason, yet I also think my sister's boyfriend is an undeserving chump and she should try better. Settling with mediocrity is psychologically tasking.

It's not about bitchy fatties voting themselves freedom to chase alpha tail. That might be the case in the US but the poor leftover Chinese women and Arab spinsters haven't been riding anything at all. I once met a smart, outgoing,  good looking Chinese lady who was a virgin at 31 (don't ask me how I know). There's nothing wrong with this people, they just have unrealistic standards about how life is supposed to be. A hundred years of romance novels, soap operas and romantic comedies of course don't help. The sheer size of the bullshit broadcasting machine that has been running for the last decades makes it amazing that people still bother to marry and have children at all.

So you see, it's quite obvious that dysgenics isn't really caused by economics at all. It's a lifestyle choice, a choice by women. And you can give them all the money you want, yet they won't change that choice. It's biologically determined. What you can do, though, is restrict the choices women can make. That works like a charm. In fact is has been working like a charm for millennia. And that's what China has just started to do.

The New York Times reports how Chinese universities have just started to require higher test scores to women than to men for entrance. Well the report is not about that administrative fact, it's about how many female students are angry and complaining about it. The article tries to be damning but the sheer reasonableness of the college administrators is just too overwhelming. Girls are encouraged not to go into careers like criminology, engineering or Arabic. Because experience says they won't end up liking the jobs they would get. The government is encouraging students to think on the long term. The horror!

The second half of the article is a reminder of a fact that is being publicised heavily lately, that women are surpassing men as students and in some sectors of th economy. I won't comment on the issue itself and its causes, as Roissy and many others have already done so pretty well. Still articles like that show how things that almost everybody agrees are good things, like meritocracy, can and in fact do become destructive when taken out of their proper context. So women get better test scores. Right. So they deserve status and access to the system. But why? What does "deserve" even mean? Why not think on the long term consequences of encouraging women to spend their most fertile years in competing with men? 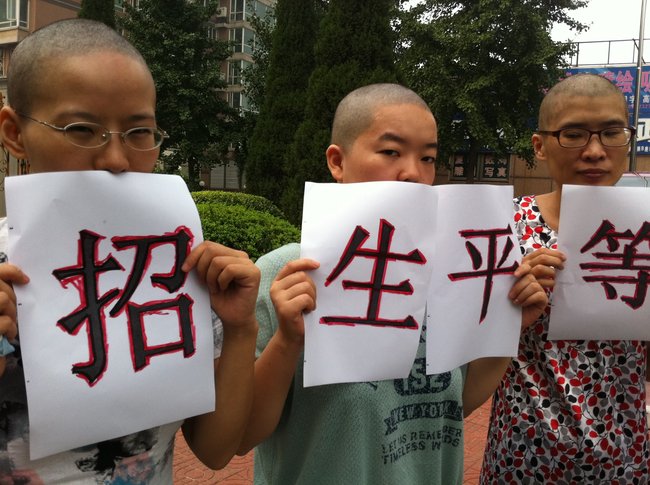 Academia robbed us of our vaginas

Given that women are hypergamous, and there's nothing we can do about that, it necessarily follows that the only way of encouraging reproduction is ceteris paribus giving less status to women than to men. Feminists talk often about the old stereotype of housewives chained to their kitchens, made to walk barefoot. Well that's exactly the point. High IQ females by their own nature are annoying enough, and lack in many qualities that men seek after. Giving them status, therefore narrowing their mating pool, only makes the matters worse. It's not fair of course, but that's how life is. I understand life sucks for a smart but plain looking woman, who can tell unworthy men better than anyone else, but whom worthy man ignore because she lacks in what men really want (looks). But the solution is not to give her a high paying job or an academic loudspeaker so she can write feminist books and feel happy about herself. What we have to do is get her married early and get those nice smart genes into the next generation.

And the only way to do that is to restrict women's access to education. Of course the new regulations in China are a tiny, infinitesimal step towards that goal. I hadn't heard of the news before, but googling I found a chinese article from July, with the hilarious title: "The different entry scores for some college majors are suspected of being gender discrimination". Suspected! No dear, they are the very definition of gender discrimination. It is interesting that it is China the first to officially discriminate against women. The Communist revolution also brought wholesale Soviet feminism into China, and women have more privileges and are a bigger part of the workforce than any other Asian country. I guess the unprecedented rise in women's social status, plus the demographic crisis caused by selective abortion hasn't gone unnoticed by the government. Chinese culture is obsessed with cognitive power, and IQ is widely (if not universally) understood to be genetic. The Shengnü epidemic is a threat to the nation, so the government is timidly pushing for eugenics. The best and most effective eugenics policy. Let's wish them luck.