So Africans are dying because of some nasty virus, and white doctors are all flocking to Africa to help those poor people. We can't have Africans dying. No way. Gotta save them. All of'em.

Save them even though the Ebola virus is nasty enough to kill most doctors that get in contact with patients, no matter how well protected. It doesn't help that the Africans aren't very cooperative with the medical staff.

And why would they? Now put yourself in the place of an average West African. Some people around you are dying of a nasty illness. Soon later a bunch of skinny white people appear in your village. And if whitey wasn't spooky enough as usual, this time they appear looking like this: Well if these people aren't witches I don't know what is. They probably brought this whole thing themselves. Note that the shit hasn't been getting any better after this white witches in drag came in and disturbed the whole place. Fortunately we have been sacrificing some animals to the spirits to fight off the evil stuff; and some of the white witches are dying too; surely as a result of our awesome dancing.

Now put yourself in place of a West African government official. You get this people dying thing which is scary as fuck; white people call you day and night talking about this Ebola thing which must be stopped; your cousins won't shut up talking about spirits and white witches. You're just scared of catching something weird; and your political opponents, those guys whose daughters you raped and impaled during the last coup, have sworn to curse you with all kind of black magic; so odds are this Ebola stuff has come to target you. So what do you do? 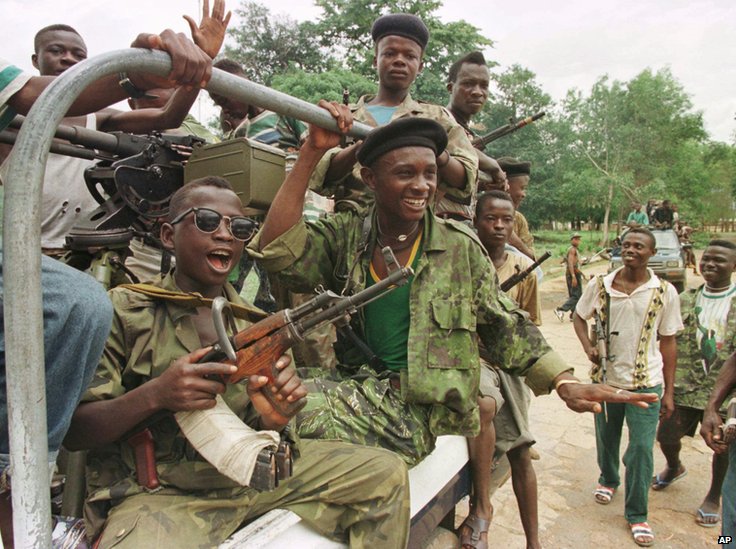 Hundreds of troops deployed in Sierra Leone and Liberia on Monday to fight the worst outbreak of the deadly Ebola virus, as the death toll climbed to 887 and three new suspected cases of the highly contagious disease were reported in Nigeria.

Well send some troops, goddammit. Send your boys to kill off all these sick fucks so the disease stops spreading. What else is there? This is our culture; that's how we deal with evil spirits.

But no, Africa has no culture. See, multiculturalism is about dresses and food; you aren't really allowed to do anything which whitey doesn't like or think it's cool to take pictures of. Right now the governments of Sierra Leone and Liberia are probably getting calls from every single government in Europe and North America, telling them to not gun down anyone or they'll close down their bank accounts in Switzerland. You gotta risk the worst virus ever spreading all over your country because, hey, those white doctors in yellow witch-suits have to get their pics to Instagram.

Of course it's not about that. It's about saving lives. Lives are all that matters. Can't get enough of those.