The fall of the Girondins on 2 June, helped by the actions of François Hanriot, the new leader of the National Guard, was one of Marat's last achievements. Forced to retire from the Convention as a result of his worsening skin disease, he continued to work from home, where he soaked in a medicinal bath. Now that the Montagnards no longer needed his support in the struggle against the Girondins, Robespierre and other leading Montagnards began to separate themselves from him, while the Convention largely ignored his letters.

Marat was in his bathtub on 13 July, when a young woman from Caen, Charlotte Corday, appeared at his flat, claiming to have vital information on the activities of the escaped Girondins who had fled to Normandy. Despite his wife Simonne's protests, Marat asked for her to enter and gave her an audience by his bath, over which a board had been laid to serve as a writing desk. Their interview lasted around fifteen minutes. He asked her what was happening in Caen and she explained, reciting a list of the offending deputies. After he had finished writing out the list, Corday claimed that he told her, "Their heads will fall within a fortnight". A statement which she later changed at her trial to, "Soon I shall have them all guillotined in Paris".  (...) At that moment, Corday rose from her chair, drawing out from her corset the five-inch kitchen knife, which she had bought earlier that day, and brought it down hard into Marat’s chest, where it pierced just under his right clavicle, opening the carotid artery, close to the heart. (...)

Corday was a Girondin sympathiser who came from an impoverished royalist family – her brothers were émigrés who had left to join the exiled royal princes. From her own account, and those of witnesses, it is clear that she had been inspired by Girondin speeches to a hatred of the Montagnards and their excesses, symbolised most powerfully in the character of Marat.[9] The Book of Days claims the motive was to "avenge the death of her friend Barboroux". Marat's assassination contributed to the mounting suspicion which fed the Terror during which thousands of the Jacobins' adversaries – both royalists and Girondins – were executed on supposed charges of treason. Charlotte Corday was guillotined on 17 July 1793 for the murder. During her four-day trial, she had testified that she had carried out the assassination alone, saying "I killed one man to save 100,000". 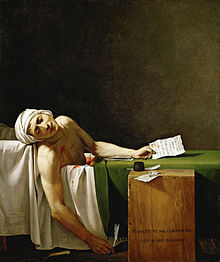 The Death of Marat by Jacques-Louis David (1793)

Marat's assassination led to his apotheosis. The painter Jacques-Louis David, a member of one of the two "Great Committees" (the Committee of General Security), was asked to organise a grand funeral. David took up the task of immortalising Marat in the painting The Death of Marat, beautifying the skin that was discoloured and scabbed from his chronic skin disease in an attempt to create antique virtue. David, as a result of this work, has since been criticized as glorifying the Jacobin's death. The entire National Convention attended Marat's funeral and he was buried under a weeping willow, in the garden of the former Club des Cordeliers (former Couvent des Cordeliers). After Marat’s death, he was viewed by many as a martyr for the revolution, and was immortalized in various ways in order to preserve the values he stood for. His heart was embalmed separately and placed in an urn in an altar erected to his memory at the Cordeliers in order to inspire speeches that were similar in style to Marat’s eloquent journalistic skills.[10] On his tomb, the inscription on a plaque read: "Unité, Indivisibilité de la République, Liberté, Égalité, Fraternité ou la mort". His remains were transferred to the Panthéon on 25 November 1793 and his near messianic role in the Revolution was confirmed with the elegy: Like Jesus, Marat loved ardently the people, and only them. Like Jesus, Marat hated kings, nobles, priests, rogues and, like Jesus, he never stopped fighting against these plagues of the people. The eulogy was given by the Marquis de Sade, delegate of the Section Piques and an ally of Marat's faction in the National Convention (there is evidence to suggest that shortly before his death Marat had fallen out with de Sade and was arranging for him to be arrested). By this stage de Sade was becoming appalled with the excesses of the Reign of Terror and was later removed from office and imprisoned for "moderatism" on the fifth of December.

On 19 November, the port city of Le Havre-de-Grâce changed its name to Le Havre-de-Marat and then Le Havre-Marat. When the Jacobins started their dechristianisation campaign to set up the Cult of Reason of Hébert and Chaumette and Cult of the Supreme Being of Robespierre, Marat was made a quasi-saint, and his bust often replaced crucifixes in the former churches of Paris.