Yesterday I woke up to this piece of news:

Hilarity ensued. This guy, Hè Jiànkuí 贺建奎, professor at China's Southern University of Science and Technology, with good, manly posture, was bringing the future to our time. 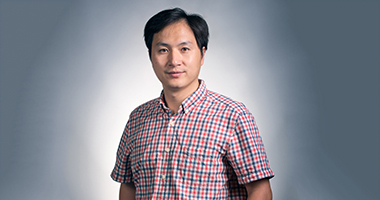 I was feeling weird already. But then this other bombshell happens.

Babies are already born! Twin girls, Lulu and Nana. Which are quite standard names for Chinese girls today, even though that sort of name would've sound like prostitutes 50 years ago. But I digress.

The mad scientist who had created the first CRISPR babies out of the blue, in secret, just like that! Had set up a Youtube channel where, in lousy English, he explained his whole project. Look at him here. His posture is not so good in the videos.

His procedure involved knocking down the CCR5 gene, supposedly giving immunity to AIDS. The guy went out of his way to denounce the use of gene editing (he branded his procedure as "gene surgery". I'm just this doctor doing surgery, you see) for purposes of improving IQ. "That should be banned!" he said.

Oh man, we were just getting excited at the possibilities here. Immunity to AIDS? Getting AIDS is not a real concern for most people at all. Who cares about homosexuals really. Why is this guy using what might turn to be the most consequential technology in the history of mankind just to make life easier for homosexuals? And why is he bragging in English on Youtube? Which is banned in China. And why is his email in Gmail? Which is banned in China? Isn't this some kind of secret Chinese government project to produce SuperHan?

Short answer is, no. Long answer is: we were all getting excited as state media (People's Daily, The Paper, etc.) reported on the news on a fairly neutral tone. Those pieces were deleted a few hours later, as it surfaced that He Jiankui didn't make the CRISPR babies through his university research. Oh no, he had gone rogue, cooperating with a hospital called Harmonicare, 深圳和美妇儿科医院. A maternity hospital, owned by the infamous, and I mean infamous, Putian hospital conglomerate. 莆田系.

If you search for the news in China, you don't get "ethics" or "horror" or "brave new world". No, all you get is "Those fucking Putian guys have gone crazy!!", again and again, and again. If this had been a state-run project, nobody would be saying anything. Yes, some western educated scientists would protest. But the mood would have been "oh, wow. Cool.". That was the general reaction of 90% of people when they first read the news, before the details started to trickle down. But once the Putian meme was out, most people in China wanted to grab Mr. He and tear him down to pieces.

He Jiankui must have known what he was getting into. He took a 3 year leave from his university post in February, supposedly to focus on this CRISPR baby project. The university has promptly disowned him, and 122 biologists come out asking for his imprisonment. China has started an investigation. It's not looking good.

Putian is a small town in coastal Fujian province. There's nothing special about it, besides them being Fujianese, and thus a bunch of cutthroat money-grabbers with no sense of ethics and morals. Yes, nobody likes the Fujianese, especially in China. For some reason the Putianese have a virtual monopoly of private hospitals in China; or at least that's what people in the street will tell you. Supposedly they created a good political patronage network under Jiang Zemin in the 1990s, and since then, no private hospital can get an operating license in China if they're not part of the Putian mafia.

Having a monopoly, and being (again, that's the stereotype) genetically evil, the Putianese run hospitals are famous in China for outrageous prices and making up diseases so they can do expensive surgery to cure them. Allegations of baby theft and organ trafficking are also common. Again, I don't know how true. I assume that the prices are high, and yes, unnecessary surgery happens, so the anger they have caused through those two things have escalated into Putianese doctors eating babies for breakfast and selling the organs to the Jews or something. Again, true or not, the street believes it, and that is newsworthy indeed.

It surprised no one that He Jiankui did his research through a Putian-owned hospital. Those guys will do anything for money. The question, however, remains: is this for real? Did he really pull it off? People on Twitter are saying they were classmates with the guy, and he was a physics major who only got into biology recently, no way he has the skill to pull this off. This could be just some marketing ploy to get fame for the Putianese IVF clinic he is now working for. Again, everything is fake in China. The Chinese will tell you so themselves.

I don't know what to believe. If CRISPR babies are real, this guy is in trouble. If the babies are fake, then this guy got into real trouble for no reason at all. Yes, he got his Youtube views, and some fancy videos where he speaks in English. But what he did is kinda illegal in China; and while China enforces its own laws when it wants to, making an international scandal of THE MOST IMPORTANT TECHNOLOGY EVER is pretty much the one thing that will trigger government attention in China. I hope for his own good that he's just some mad scientist who went rogue.

If he is a fake, he's gonna spend a long, long, long time in jail. All in exchange of 3 lame Youtube videos. If so, shame on you, He Jiankui. You are the dumbest guy ever, and you'd have brought shame on a great technology which could delay its application to humanity for decades. Decades which we don't have, at this rate of IQ shredding.

China was kinda ok with gene editing, but by associating the technology with the most hated institution in China, he could very much have forced the hand of the Chinese government and have it effectively banned for good. The future of humanity may have just died by the intersection of a greedy hospital, a vain scientist and social media.

Say it ain't so, He Jiankui. Better be true.