I've been watching these days Kenneth Clark's Civilisation series, BBC (1969). Its basically a history of western civilisation taught through the history of art, him being a curator. Although Clark also makes the occasional comment on culture, from his aesthetically traditionalist angle. Its normally just a short remark on how 1960s hippies are tasteless, or how the Reformation was little less than mass peasant histeria. But in the end of the 8th chapter, The Light of Experience,  which is about the 17th century, he makes this long, very charged comment.

Between Descartes and Newton, Western man created those instruments of thought that set him apart from the other peoples of the world. And if you look at the average 19th century historian (...), you'll think that European Civilisation seems almost to begin with this achievement. The strange thing is that none of these mid-century writers (except for Carlyle and Ruskin) seemed to notice that the triumph of rational philosophy had resulted in a new form of barbarism.  If, from the balcony of the Greeenwich observatory, I look beyond the order of Wrens's hospital I see the squalid disorder of industrial society. It has grown up as a result of the same conditions that allowed the Dutch to build their beautiful towns, to support their painters, to print the works of philosophers: fluid capital, a free economy, a flow of exports and imports, a belief in cause and effect. Well every civilis...
Continue Reading →

Back when Pope John Paul II died, I let myself be bothered by all the media coverage. I heard that the new pope, Joseph Ratzinger, was known as a conservative figure, and went on to read one of his books, written before getting the big job. I don't remember the exact quote, but he said in some place that the modern liberal assault on Christianity will continue, and the Church will continue losing numbers. But a small core of believers will remain, and after liberalism collapses, he foresees that small core of hardcore Christians to rise again and rebuild the world.

Of course he doesn't say that now that he is pope. But I thought his thinking interesting. If you think about it carefully, it's not only Church attendance what has decline in the last century. Public morals have collapsed, and taste in art has also declined precipitously. Does the Church really want to be relevant in a world in which people don't have manners and artists build ugly stuff?

Few churches have been built in the last century, but see the few that have been done.

Basilica of our lady of Guadalupe, Mexico. 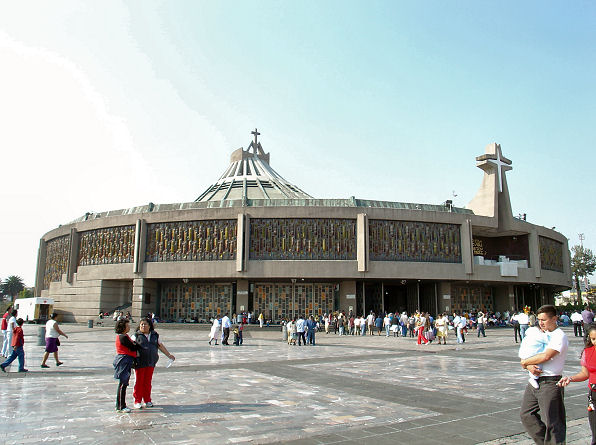 Doing some research on Japanese religion, induced by Jim's latest overstretch, I found a very neat building in Japan. This is the 神社本庁, the state bureau that manage the nation's Shinto shrines. Which is why it's called 本庁, central bureau.

Oh, but McArthur's reforms decreed that Japan was to have separation of state and religion. So the state can't manage the shrines anymore. No problem. We'll just get privatize the agency, not even changing its name, and keep the same people running it anyway. We'll just make it like the same bureaucrats from the same agency just happen to move there when they retire from the government.

Creative politics, and creative architecture that is. The building appears to be in Shibuya, one of the trendy parts of Tokyo, so that's probably why it's hard to get the right angle to take a picture. But you can tell that it's a very modern building with big windows and modern piping and whatnot; but they've had the good sense of making the roof look like a Shinto shrine. Wh...