So it seems like the Israeli government has reached a deal with Hamas over the return of their one little captive soldier, Gilad Shalit.

The poor Ashkenazi fella, just 25 this year, was kidnapped 5 years ago by Hamas, in a cross border raid. Of course Hamas used it immediately to negotiate the release of palestinian prisoners held by Israel. Israel always refused.

I don't know what happened in Israel's internal politics that made Netanyahu accept a deal right now. Maybe the Israeli youth demonstrations have something to do with it, I don't know nor care. I don't also care about the huge media campaign that has been going on in Israel about the kid. I guess the parents of the kid had some money, and there is always lots of sympathy available for a poor kid kidnapped by those Hamas thugs.

What is important, in my opinion, is the deal reached. Israel will release 1000 prisoners in exchange for Gilad Shalit. One damn thousand!

caption="I'm worth more than 1000 arabs all together"

Which begs the question: what is so awesome about this kid? Well that's a fallacy. To say it in economic terms, the utillity for the Israelian government of having back this adorable little nerd is bigger than the potential danger of releasing 1000 run-of-the-mill standard palestinian...

The Economist just opened a new exclusive section for  China, taking China out of their Asian. So China is the new focus country of The Economist, besides the US. Here they explain why the interest: they will use the section to argue for political reform.

Read the whole thing, it's the most disingenuous piece of journalism ever. I'll take some representative quotes:

But our interest in China lies also in its politics: it is governed by a system that is out of step with global norms.

So dissidents such as Yu Jie, who alleges he was tortured by security agents and has just left China for America, are harassed. Yet that reflex will make the party’s job harder. It needs instead to master the art of letting go.

for China’s rise to continue, the model cannot remain the same. That’s because China, and the world, are changing.

Freeing up the financial system would give consumers more spending power and improve the allocation of capital.

freedom to organise can help, not hinder, the country’s economic rise. Labour unions help industrial peace by discouraging wildcat strikes. Pressure groups can keep a check on corruption. Temples, monasteries, churches and mosques can give prosperous Chinese a motive to help provide welfare. Religious and cultural organisations can offer people meaning to life beyond the insatiable hunger for rapid economic growth.

There's a good proof of HBD here in Business Insider.

As I said earlier, BI is mostly crap, but they know their audience. Do you imagine the WSJ making an article on the Rothschilds? They're not supposed to exist, you know. They're a myth, a conspiracy theory, like Jewish influence in the USA.

Well they're very real, and doing very well. Privilege! You may say. Well sure. But come on, privilege doesn't make you a good violinist. Or it doesn't assure that your wineries or horse collections don't lose money. They are doing well because they are well bred. Well Nat doesn't look very bright, but maybe that's just me. caption="Regression to the mean. In looks."

I always thought that the so called 'Regression to the mean' was just the result of rich and successful people marrying beautiful women, who aren't maybe that bright. So the offspring of a smart-but-horny father and a hot-but-dull mother is a regressed to the mean child. It seems that the Rothschilds have been choosing their mates well though. So their offspring don't show much regression. As I said elites tend t...

A Jewish acquaintance of mine, an old man, told me once: "You Christians are nuts. What's that about rich people going to hell? Blessed are the poor? You should praise the rich, they might be useful to you."

I guess he had a point. Christianity, well understood, is not very conducive to doing business. This idea was confirmed on seeing a shrine for the Chinese Money God. How can we compete with a people for whom money is a god? See how the fuckers translate it to Mammon (see below the main banner in the website). Mammon is the bad guy, you know!

Nah, they have it right.

This news just cracked me up: 40k orthodox Jews gather at a New York Stadium to talk about the dangers of the internet. My first thought was about our friend Bill, who uses to admonish us of the dangers of modernity and consumerism. Well I am an internet addict, but perhaps these Jews have a point. The Internet is a very dangerous thing for an immature mind. 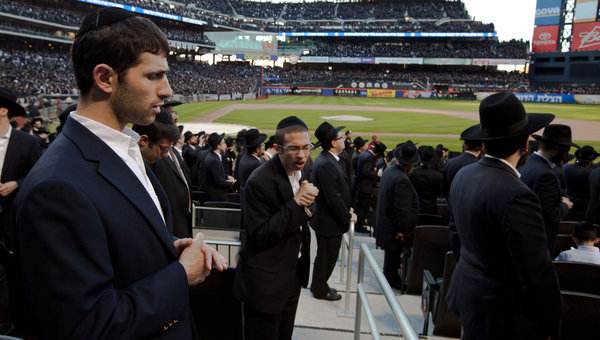 Payots for sale! Nice and cheap!! Made only with hair from chinese girls!

The I saw the punchline:

Recently we had the Chalupa cultists tell us plainly about their beliefs:

Now even Jewish agit-propists are putting all cards on the table:

Taqqiya is a hard business. Lying is psychologically taxing, even for the sociopaths that people the journalism business. And as the Cathedral recruits further into the left side of the Bell Curve, we'll see more and more clueless apparatchicks revealing their madness. Know thy enemy, said Sun Zi. It's getting easier every day.

I have my reserves towards the, let's call it Moldbug theory of Jewish leftism, which argues that Jews aren't a causative agent of leftism, but that during Emancipation the Jews contracted the virus of Progressivism, and being highly talented, they caused the virus to mutate and grow further into the catastrophic malady that it became.

I really have my reserves. In the end it's all about assigning blame, and when you think about it carefully, the whole idea is quite misguided. Assigning blame for particular memes is hard enough when talking about individuals; when talking about groups, the very concept of agency becomes quite fuzzy. So trying to come up with a comprehensive theory on blame or the origins of anything is quite probably the wrong way of looking at it.

Nonetheless it is always interesting to look at particular examples, particular people and particular ideas. Notwithstanding my reserves towards clearing the Jews of all blame about leftism, I have found a quite persuasive data point towards them being victims of infection by the progressive virus.

This is from a recent BBC documentary series on the Jews, led by Simon Schama. Simon Schama himself is quite a good example of Jews being victims of English ideology, but just watch the video.

Lol. The shtetto and the ghetto. That's just humiliating. If you let that happen at your place of worship, you're not dominating the world. Just saying. Take a look at this:

The Foreign Ministry on Monday called on governments around the world to regulate social media in order to combat anti-Semitism and violent incitement, reiterating the government’s support last year for Internet censorship during an anti-racism conference. (...)

“What is YouTube? What is Facebook? What is Twitter? And what is Google?” he asked. “Are they a free speech corner like [London’s] Hyde Park or are they more similar to a radio station in the public domain?” Referring to cartoons of Palestinians killing Jews and other such material circulating online, Tor asked why platforms such as Google search, You- Tube, Facebook and Twitter are “tolerating” violent incitement and “saying they are protected in a holy way by free speech.”

“How is it possible that the government of France and the European Union all feel that incitement in Arabic on social media in Europe calling for physical attacks on Jews is permitted and that there is no requirement from industry to do something about it,” he continued, adding that Israel is working with European partners to push the technology sector to ado...

Said Matt Yglesias. Who, while being a disgusting piece of grease, is more candid than most other apparatchiks. Which is useful in understanding what leftists, or a particular set of leftists from a particular ethnic group, are thinking about. See this other recent example:

Mmm why would he say that? If you're into memes this guy makes the same point.